Growing Up Catholic: The Millennium Edition 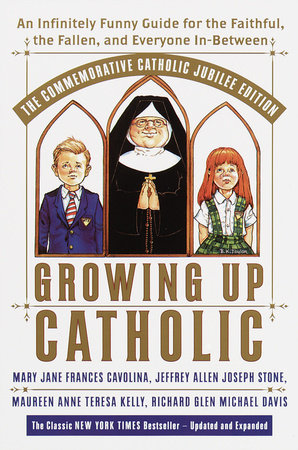 Growing Up Catholic: The Millennium Edition

An Infinitely Funny Guide for the Faithful, the Fallen and Everyone In-Between

The original edition of Growing Up Catholic, along with its sequels, struck a heavenly chord with a generation of Catholics of all persuasions. Now, to commemorate the Great Catholic Jubilee of the Year 2000, the authors bless us with an updated and expanded version of this beloved national bestseller. Filled with a witty, poignant, and downright hilarious potpourri of essays, lists, games, drawings, photos, and quizzes, it includes the best of all three Growing Up Catholic books, along with many all-new features, such as:

Jubilee 2000: Not Your Average Birthday Party
Father Phil: Confessor to the Sopranos
Who Will Be The Next Pope?: A Handicapper’s Guide
Ansubstantiationtray: Can’t Anybody Here Speak Latin Anymore?
www.holy.com

For Catholics of all ages — from those who lived through Vatican II to those who’ve never seen a nun’s habit except in a movie — Growing Up Catholic celebrates in a lighthearted way the funny and sublime side of day-to-day Catholic life.