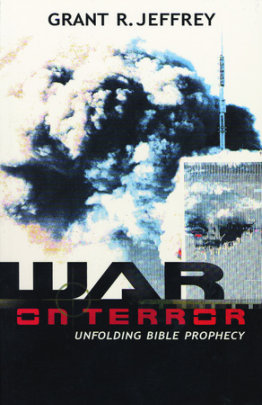 The World Changed Forever on September 11, 2001

Best-selling author Grant R. Jeffrey explores the motives and plans of the Islamic terrorists that declared war on America. War on Terror examines the truth “behind the headlines” about this vital struggle that affects all of us. Learn how the American-led alliance will use our powerful intelligence and military forces to destroy the thousands of terrorists as well as the governments of Iraq, Sudan, and Yemen that support terrorism.

Key features include:
·Compelling evidence Iraq is behind Bin Laden’s attacks on America
·The war on terror against Iraq was prophesied by Jeremiah 2500 years ago
·The nations that support Islamic terror
·Why Islamic terrorists hate America, Israel, and Arab governments
·How America will defeat the global threat from Islamic terrorists
·The Taliban–the Pashtun tribe and the Ten Lost Tribes
·Terror attacks on Israel–America’s key strategic ally in the Middle East
·Russia’s Strategic Goal–to turn the coalition against Israel
·New surveillance and counter-terrorism technology and world government
·The need for security versus our privacy and freedom