Prayers for the Stolen by Jennifer Clement 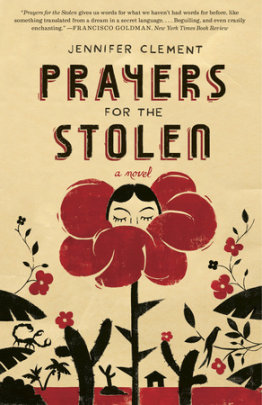 Prayers for the Stolen by Jennifer Clement

Ladydi Garcia Martínez is fierce, funny and smart. She was born into a world where being a girl is a dangerous thing. In the mountains of Guerrero, Mexico, women must fend for themselves, as their men have left to seek opportunities elsewhere. Here in the shadow of the drug war, bodies turn up on the outskirts of the village to be taken back to the earth by scorpions and snakes. School is held sporadically, when a volunteer can be coerced away from the big city for a semester. In Guerrero the drug lords are kings, and mothers disguise their daughters as sons, or when that fails they “make them ugly” – cropping their hair, blackening their teeth- anything to protect them from the rapacious grasp of the cartels. And when the black SUVs roll through town, Ladydi and her friends burrow into holes in their backyards like animals, tucked safely out of sight.

While her mother waits in vain for her husband’s return, Ladydi and her friends dream of a future that holds more promise than mere survival, finding humor, solidarity and fun in the face of so much tragedy. When Ladydi is offered work as a nanny for a wealthy family in Acapulco, she seizes the chance, and finds her first taste of love with a young caretaker there. But when a local murder tied to the cartel implicates a friend, Ladydi’s future takes a dark turn. Despite the odds against her, this spirited heroine’s resilience and resolve bring hope to otherwise heartbreaking conditions.

An illuminating and affecting portrait of women in rural Mexico, and a stunning exploration of the hidden consequences of an unjust war, PRAYERS FOR THE STOLEN is an unforgettable story of friendship, family, and determination.

From the Hardcover edition.