Nicholson: A Biography by Marc Eliot 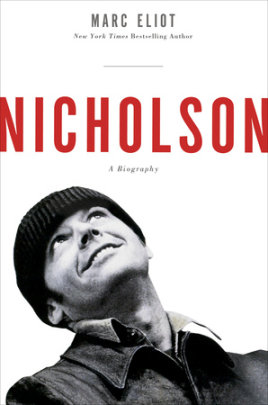 Nicholson: A Biography by Marc Eliot

THE GROUNDBREAKING NEW BIOGRAPHY OF A MAN WITH ONE OF THE MOST ICONIC AND FASCINATING CAREERS—AND LIVES—IN HOLLYWOOD.

For five decades, Jack Nicholson has been part of film history. With twelve Oscar nominations to his credit and legendary roles in films like Easy Rider, Five Easy Pieces, Terms of Endearment, The Shining, and One Flew Over the Cuckoo’s Nest, Nicholson creates original, memorable characters like no other actor of his generation. And his personal life has been no less of an adventure—Nicholson has always been at the center of the Hollywood elite and has courted some of the most famous and beautiful women in the world.

Relying on years of extensive research and interviews with insiders who know Nicholson best, acclaimed biographer Marc Eliot sheds new light on Nicholson’s life on and off the screen. From Nicholson’s working-class childhood in New Jersey, where family secrets threatened to tear his family apart, to raucous nights on the town with Warren Beatty and tumultuous relationships with starlets like Michelle Phillips, Anjelica Huston, and Lara Flynn Boyle, to movie sets working with such legendary directors and costars as Dennis Hopper, Stanley Kubrick, Meryl Streep, and Roman Polanski, Eliot paints a sweeping picture of the breadth of Nicholson’s fifty-year career in film, as well as an intimate portrait of his personal life.

Equally, at home on the bookshelves of serious film historians and fans of compulsively readable Hollywood biographies, Nicholson is both a comprehensive tribute to a film legend and an entertaining look at a truly remarkable life.